Who was LT. Richard Somers?? 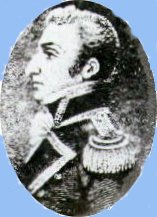 Richard Somers was horn at Somers Point, New Jersey on 15 September 1778. He received his warrant as midshipman on 30 April 1798, and shortly thereafter was assigned to the frigate United States, under command of Commodore John Barry.

During the TripoIitan War, he commanded the schooner Nautilus in the Mediterranean, being Promoted to Master Commandant in 1804. He also commanded one of the gunboat divisions in the many attacks on the Tripolitan naval forces in the harbor of Tripoli.

During these operations, the ketch Intrepid was converted into a fire ship and filled with a large quantity of powder and explosives. On the night of 4 Septem ber 1804, Intrepid, under Somers and a crew of volunteers, was sent in to be exploded among the enemy's shipping in the hope of destroying gunboats and perhaps the town itself. Unfortunately, she was sighted by the Tripolitans, who opened fire and prematurely blew her up. The daring crew all perished.

Congress passed a resolution of sympathy for the relatives of Somers and his men. A monument to the memory of Somers and his brave companions was created in Italy and shipped back to the US in crates aboard the USS Constitution. The monument, known as the Tripoli monument, was first erected at the Washington Navy Yard, where it remained until after the British Raid on Washington in 1814. It now stands on the grounds of the U.S. Naval Academy at Annapolis, Maryland, and is the oldest monument commemorating combat in the United States.

There is currently a movement to have Somers and his men, who are currently buried in Tripoli, repatriated to the United States. (John Paul Jones, who was buried in France, was returned to the U.S. and is now buried at Annapolis.) Former Congressman and ambassador to Panama, William Hughes, is spearheading this effort. The current thaw in relations with Libya give an opportunity that hopefully will not be lost.

Thanks to CDR Tyrone Martin (USN RET), and Bill Kelly, (Author of the book "300 years at the point") for their contribution to this section.

Return to the Quarterdeck